Mahmud writes: "In the early morning `Abdu'l-Bahá went out onto the balcony. On one side was a view of an extensive field of some 40 miles and on the other a vista of green plains and verdant mountains ranging for some 16 miles. He remarked:
If there is any justice, then what I have done for the friends will become apparent. I have done all this through the bounty and assistance of the Blessed Beauty. Otherwise, what have we Persians in common with the Americans on top of this mountain and valley in Dublin?
A likeness of Táhirih which had been published by one of the Germans was presented to `Abdu'l-Bahá, who said, `This picture is not at all authentic.' He then spoke of the life of Táhirih. 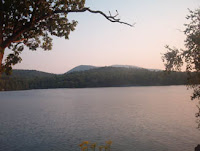 At the invitation of Mrs Parsons, `Abdu'l-Bahá went to her home for lunch. In the afternoon, several of Mrs Parsons's friends came by and were deeply impressed by the Master's talk. From this day forward, visitors began to come in great numbers. In the afternoon Mr Parsons brought his carriage to take the Master for a ride. They drove to Lake Dublin where `Abdu'l-Bahá spoke to the members of the club about spirituality and the progress of this new age. When He returned He instructed that cables be sent to the Assemblies of the East.
In the evening Mr Harmon, a leader of the Theosophists, came from Boston to see the Master, who spoke to him about divine civilization, the influence of the Word of God and about this great Bahá'í Dispensation:
One of the martyrs of this Cause, at the time of his martyrdom exclaimed, `Christ said that the spirit is willing but the flesh is weak; but I say that my flesh is as happy as my spirit.'
He spoke of the spread of civilization from the East to the West, saying:
What a blessing God bestowed upon the Persians but they could not appreciate it! Had they not been ungrateful, the government of Persia would have ranked first in the world. I wrote to Muhammad `Alí Mírzá [ruler of Persia from 1907 to 1909] that if he would compensate for the spilled blood of the Bahá'ís and govern with justice, he would receive confirmation; otherwise, God doeth what He pleaseth. He did not listen to me. Again I wrote to Persia that so long as the nation and the government do not combine like milk and honey, prosperity and happiness are impossible. Persia will become desolate and the end result will be intervention by neighboring powers."

What a diverse day!  Agnes Parsons writes that she walked toward His house in the morning, "thinking I might meet Him and that He might care to see the baseball game between Dublin & the Camp." Instead, she met various people who called upon Him, and there was various conversation. She writes, "If I could only remember the interesting subjects He talked of!  My red shawl was there and I asked the significance of that color. He said that red expressed activity. Carried to extremes it would stimulate to warfare--that green expresses joy, yellow love, blue thought black sorrow. . . ."  Mahmud doesn't mention any of this!

Agnes says later that they drove up to a beautiful "Seaward" view, and she said, "Mashrak El Askar" (implying a future house of worship) and He replied, "Insha'llah."

They drove around the lake, then to the boat house, and Agnes stopped at "the Club" to visit a few people at the "usual" Saturday meeting. Then they drove home through the village, reaching `Abdu'l-Bahá's home first. He spoke to her earnestly about the bills coming to Him. "He insisted that they must be sent to Him."

It's good that we have multiple perspectives to round out the picture of His time there. But what else might we be missing?

See Phillip Tussing's document about Dublin.  And the newsreel story on Dublin!  Both are linked to this blog, under "Resources."
Posted by Anne Perry at 1:00 AM