We are pleased to share the news that Luminous Journey: 'Abdu'l-Bahá in America, 1912 is now available, and completely free on the Official Luminous Journey YouTube Channel:  https://www.youtube.com/channel/UCx4Vj0KUNSYBc1lY7_UAVyQ

Here you can watch the whole film (2.5 hours) or the film in two sections (1.25 hours each) or access the different geographical segments (26) and also see the behind-the-scenes videos.

Communities have been sponsoring Zoom screenings, usually over two nights, with some discussion about the themes or stories of the film. And now we are working on a new film, 'Abdu'l-Bahá in France! 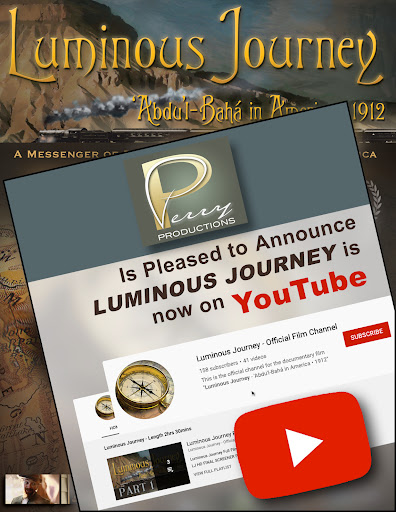 An online version of our film, Luminous Journey, is now available at 9StarMedia.com
Posted by Anne Perry at 11:35 AM No comments:

Ascension of 'Abdu'l-Baha + other language versions of LJ

Tonight we experienced a very special observance of the Ascension of 'Abdu'l-Bahá in our home. Earlier in the evening, we watched "Luminous Journey" for the first time in a really long time, with various friends arriving at points during it before our midnight program. It brought about so many memories of the Master and of making the film and receiving such confirmation!

There is an indefinable connection among souls as we celebrate the life and mourn the passing of 'Abdu'l-Baha. After the prayers, writings, and music, nine of us sat together, telling stories. Wow.

It made me want to return to this blog--which I am grateful is still there, as I should collect all the many stories that have gone into it. Unfortunately, our website for the film (LuminousJourney.org) was dismantled—we think maliciously—sometime after the Persian version was released.  Our web host says they will try to resurrect it--for $150--but not sure when we can do that. . . . How sad!

Anyway, there are now various language versions of Luminous Journey! I hope it is not a risk to list them here:

Dearest Bahá’í Friends,
The National Spiritual Assembly has just received word that the Voice of America (VOA) Persian Service will―this coming Saturday, April 30, at 11:30 a.m. EDST (8:00 p.m. in Tehran)―be airing in Persian an abbreviated version of the documentary film Luminous Journey: ‘Abdu’l-Bahá in America, 1912, transmitted via Ekran.
This original film, created by Anne and Tim Perry of Perry Productions, brings to light a facet of American history little known to the average citizen: ‘Abdu’l-Bahá’s 239-day sojourn in the United States and Canada in 1912, the transforming effects of which are still being felt more than a century later.
The abbreviated version of the film being broadcast to Iran by VOA was prepared by an Iranian filmmaker, Mr. Karim Bakhtiary, eager to introduce ‘Abdu’l-Bahá to an Iranian audience that has never been given an opportunity to know Him nor to recognize Him as a significant Iranian Whose ideas, character, writings, and talks have profoundly influenced both notables and ordinary people alike.
Please make the broadcast information above available to the Iranian friends in your community at your earliest opportunity, asking them to share it with their families and acquaintances so that this inspiring story will be seen as widely as possible in Iran and in Iranian circles abroad.
With loving Bahá’í greetings,
Kenneth E. Bowers Secretary
National Spiritual Assembly of the   Bahá'ís of the United States
Posted by Anne Perry at 12:28 AM No comments: 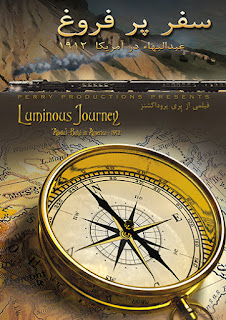 Opportunities at end of 2015

The Persian version of Luminous Journey was shown in two parts at the recent Grand Canyon conference in Phoenix--and I went to attend the conference. Our photo image was the only image appearing in the conference program. 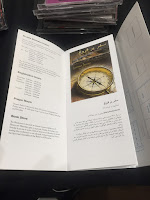 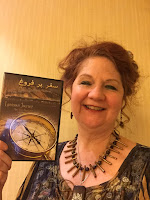 We did two screenings at the dinner hour, 5-6 pm, and surprisingly, a number of people attended. I also helped with Jon Rezin's 9 Star Media booth; we sold a number of DVDs. Best of all, I got re-inspired to work on the European story--particularly as two women we met from Germany said they would help us!  Lisa Bradley, in photos below, helped me on the second day of the screening. 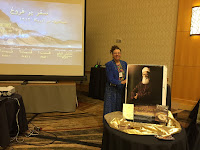 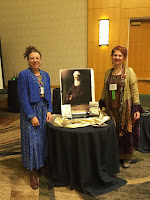 Today, Tim & I presented stories and footage of the making of Luminous Journey to the youth at the Plano Baha'i School. That was a blessing, with confirmations.  Wish we would have more opportunities to present. . . . 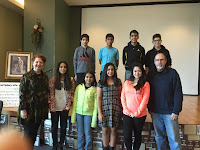 A new review of our film, by Jack McLean, appears in the first “issue” of e*lix*ir (a new arts journal): See http://www.elixir-journal.org/issue1/review1.php
Posted by Anne Perry at 2:35 AM No comments: