New York: In cases of disunity, both are wrong; "I desire distinction . . . "
Eliane Lacroix-Hopson in 'Abdu'l-Bahá in New York writes:  "On the afternoon of June 15, 'Abdu'l-Bahá came down to the waiting crowd of friends. He told them that while resting, He had dreamt that he was speaking to them at the top of His voice. The sound of His own voice awakened Him with the word "distinction." He explained the meaning of distinction in every kingdom of Creation. "I desire distinction for you. The Bahá'ís must be distinguished from others . . . but not of any worldly distinction. For you, I desire spiritual distinction."


Juliet writes:  On Friday, 15 June, I was with the Master alone for a while, and I brought up the name of Percy Grant. "He didn't understand You the other day, my Lord. He thinks that You teach asceticism, that the spirit and the flesh are two separate things."
"That is not what I said," the Master replied. "I said that the spiritual man and the materialist were two different beings. The spirit is in the flesh."

Mahmud writes (dating the passage June 13 but it occurred on the 15th): "In the morning and afternoon several prominent ministers visited the Master to invite Him to their churches. They left happy and submissive after receiving the bounty of being in His presence and witnessing the effulgence of His countenance. After they left, the Master spoke to the friends and newcomers about the power and majesty of the Blessed Beauty. With great power and dignity He related the story of the last days of `Abdu'l-Hamíd [Sultan of Turkey until he was deposed in 1909] and the malicious accusations of the enemies and adversaries:
In spite of all these persecutions and afflictions, the Cause of God triumphed and the Covenant of God gained influence. In fact, even members of the Commission of Inquiry [commission sent by the Ottoman government to investigate charges leveled against  `Abdu'l-Baha by violators of the Covenant]  who every hour ordered a more severe persecution and spread a fresh calumny and who had joined our enemies and adversaries at `Akká with the aim of destroying and effacing us, were overtaken by the wrath of God while returning to Constantinople. Affairs changed; all the tyrants were debased; some of the members of this very commission were killed or murdered; and some fled away. Finally, one of them went to the believers in Egypt and begged for minimum subsistence.
The Master gave two talks in the afternoon to the gatherings of the friends. The first was about the differences among the Bahá'ís. `Bahá'u'lláh', He said, `declared that should Bahá'ís dispute, even if it be regarding Bahá'u'lláh Himself, both are wrong. He has enjoined all to turn to the House of Justice. But prior to its being established, all matters should be referred to the Center of the Covenant whom all are commanded to obey.'
After a brief rest, the Master went to another meeting where He spoke on the distinguishing characteristics of the world of humanity. His introductory words were as follows:
I was tired and so I slept. While I was sleeping, I was conversing with you as though speaking at the top of my voice. Then through the effect of my own voice I awoke. As I awoke, one word was upon my lips -- the word imtíyáz (`distinction'). So I will speak to you upon that subject."
--------------


It is INTERESTING how the Master received ideas for His talks! And the point about disunity has huge implications for the society of the future--for the justice system and so forth. How often do we experience distress and righteous indignation when our ideas are in conflict with another's. Both are wrong. How challenging the path toward unity! Some think of "peace" as placid and boring--but it is actually infinitely challenging. Perhaps in time films and computer games and life itself will reflect an avid interest in CREATING and MAINTAINING unity--so that "both" may be "right"!
Distinction. The ending of His talk is quite inspired. As you read it, you might imagine He is addressing you.  You are sitting next to Him and He is looking right at you. 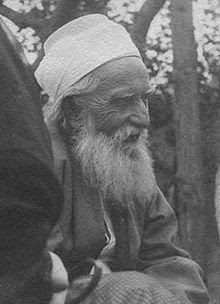