In The Diary of Agnes Parsons she writes (on May 10, 1912): “Mr. [Theodore] Spicer Simon [sic: should be Spicer-Simson] had called at my house to see Abdul Baha, but not finding Him, went to the apartment, where Abdul Baha gave him a sitting of half an hour. This with a few sketches was all Mr. Simon [sic] had, but from these he has made an excellence likeness.” This is all Parsons says; from her words we don’t know whether she commissioned the work or anything else about it.
Through inter-library loan, I obtained a book entitled  A Collector of Characters: Reminiscences of Theodore Spicer-Simson (Miami, FL: University of Miami Press, 1962).
From it I learned that Theodore Spicer-Simson (1871–1959) was a prominent English sculptor, who made portrait medallions of many well-known people, including Presidents William Howard Taft and Franklin D. Roosevelt; authors H.G. Wells, James Joyce, John Galsworthy, Sherwood Anderson, and Joseph Conrad; poets A.E. Houseman, Elinor Wylie, Robert Frost, and W.B. Yeats; playwrights George Bernard Shaw and Lady Gregory; statesman Sir Winston Churchill; inventor Henry Ford; and many others, including “Persian religious reformer Abdu'l-Bahá.”  He lived for a time in Washington, D.C. and had a studio on 12th street. (Perhaps he knew Alice Pike Barney.) 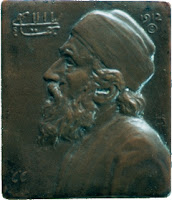 I confirmed that this medallion was the one Spicer-Simson made; its image appears on p. 105.
What is really interesting is the sculptor’s account of meeting `Abdu'l-Bahá. It follows his description of the portrait of Taft, so I’ll begin with the last paragraph of that (p. 60):
“President Taft was a very understanding person. One day I was seated by his desk when he walked into the room. I forgot to stand. When next day I apologized he answered, ‘That’s all right, I understood. You were concentrating on your work.’
“Alexander Graham Bell’s celebrated ‘Wednesday Evening’ was one of the intellectual high spots in Washington at this time, 1912. One met all sorts of personalities, men of science, of literature, teachers, poets, all men but no women. Graham Bell’s wife and his two daughters, Elsie and Marian, attended but were hidden behind a heavy curtain. As a family friend I went regularly. At one of those ‘Wednesdays’ I met Abdu’l Baha, a slight, striking-looking bearded man picturesquely gowned in Persian turban and cloak, a lovable character and very charming.
“This meeting was fortunate for me for later Mrs. Agnes Parsons, daughter of General and Mrs. Royal, asked me to do a portrait medallion of the Baha. She had made pilgrimage two years before to meet the Persian prophet in his homeland. But, would the Baha sit? To meet this situation Mrs. Parsons asked a number of her friends to her Washington home to greet the prophet. I was there and so was Margy [his wife]. After the introductions the Baha took hold of my hand and led me to a sofa where for a time we talked of aesthetics, particularly Persian art for which I had great admiration and some knowledge.  Mrs. Parsons was convinced the Baha would be willing to sit, and he was.” (60–61)
Then he changes the subject.
In the back of the book are several essays on aesthetics. “A portrait,” he says, “is the shade of one being transmuted through the soul of another, the artist. This can be proved, for a portrait is always judged by the emotional relationship of the onlooker to the person portrayed. Today the psychologists teach us that man is affected by mass-arrangement and colour; therefore, the spiritual character of persons can be represented before a single feature takes a definite form. This is perhaps the slight contribution I have made to the art of medallic portraiture. . . .” (188–89)
Later, he writes, “My urge to create beauty cohabited in my inner self with a deep and eager interest in my fellow man. . . . Now, as I sit turning page after page of the albums where the photographic reproductions of my work are consigned, I also remember the human characters I collected, so to speak, in my memory. And, conscious of having accomplished a good work with modeling tools, I shall hope I have created with words some pen-traced images of the many interesting persons I have portrayed” (196–97).
How very fascinating that the Master was among them! I wonder how many of the medallions were produced and who has them now.

The second medallion, a rectangular piece with with two sides, was designed by sculpture Louis Potter of the Circle of the Friends of the Medallion. Roger Dahl of the U.S. National Baha'i Archives writes: "It came in a nice little case. The Circle of the Friends of the Medallion was formed by Robert Hewitt Jr. and Charles deKay, with the plan to produce two medallions a year. It was fairly short lived, producing 12 medals between 1909 and 1915. The `Abdu’l-Bahá medallion was designed by sculptor Louis Potter so I have the medallion in our Works of Art Collection. Apparently the Circle was the model for the more successful Society of Medalists."
On the Medal Collectors of America website <http://www.medalcollectors.org/Guides/CoF/CoF.html> I found this image (above) of the medallion.  I can't quite make out the words at the bottom under the word "Abdu'l-Baha." There is another image next to it of the back side, with the words "Peace, Love, Unity." The only information is that it was number 7 of the 12, manufactured in November 1912 at Joseph K. Davison & Son, Philadelphia, subject: Abdu'l-Baha, Persian Reformer, size 76 x 51 mm.  Louis Potter was the designer, and he did not design any of the other medallions.
The website also mentions: "The Medals were issued in diecut pages bound in tan cloth books making the set a bookshelf collection. From published membership lists it can be surmised that no more than 500 of any of medals were issued. Allan Newman’s number twelve is the scarcest. Victor Brenner’s number four, Motherhood, is the most popular. Paul Manship’s number eleven is the most expensive (sought after by art galleries). Members of the Bahai religion seek issue number seven, of Abdul Baha, since their religion did not sanction portraits."  [An interesting misconception re. the image of the Master.]
So, regarding this one, I wonder who commissioned it, whether `Abdu'l-Bahá sat for the artist, how many were made, how many exist now.
Apparently there is also a round medallion, but I do not have an image of it. Can anyone confirm this and provide an image?
Posted by Anne Perry at 2:46 AM